TALL GRASS: THE WET SPRING AND SUMMER HAVE CREATED AN EXPLOSION OF PASTURE. 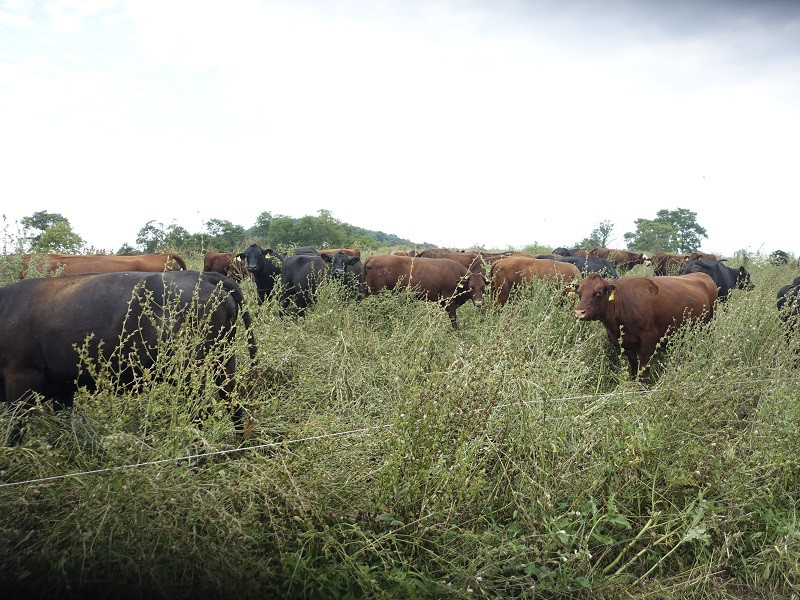 THE WET SPRING AND SUMMER HAVE CREATED AN EXPLOSION OF PASTURE.

This field hasn't been grazed since April, so chicory and Queen Anne's Lace are in full expression, four to five feet tall. These plants are pretty mature by now, so cows don't pay much attention to them, but they are interested in the fescue, orchard grass, and clover closer to the ground. In pursuing their feed, they trample mature plants, creating a mat of mulch. This keeps soil moist and cool, and brings plant-matter in contact with soil to feed microbes within - perhaps the most important species on the farm. An active population of microbes is at the heart of creating organic matter.

We are in a quandary about what to do with all of this grass. We typically don't mow a pasture until after the cows or sheep have grazed it, so they have a full range of nutrients from which to choose. This includes plants that are mature and have gone to seed, typically up high, providing energy, and plants that are less mature, typically down low, providing protein. After the stock pass through, we usually clean up the pasture with mowing.

In recent years, we have not made hay, because our cow numbers are expanding and we want to save grass for them. But this year, we could have made hay, and still had plenty of pasture available. In April, when one has to decide about hay-making and hay-purchasing, one doesn't know how the season will unfold, so it seemed prudent to take the cautious route and buy the hay. Purchased hay also brings nutrients to the farm, which is a benefit.

The picture above is of our "dry" cows, whose calves were weaned at 10 months of age several weeks ago. The cows will be calving in mid-September, and we are deciding in which pasture they should be located for this important time. The 30-acre-pasture of choice hasn't been grazed since early May, so it will be about 4 feet tall at that time, if we leave it untouched. Will the feed be good enough for lactating cows? Will we be able to find the newborns in the tall cover to eartag them? How will we walk through growth that tall and entangled to set daily "breaks" of grass? We aren't sure, but the thought is to mow half the field now, so it has time to regrow sufficiently before calving, and then mow strips in the other half for daily breaks. We will observe the difference in outcome, if any.

One of the concerns about grazing mature feed is whether the animal is receiving enough nutrition. The way we monitor nutrition is by watching the triangular "rumen-fill" on the left side of the cow in front of the hip bone. The other indicator is to watch the manure. If it becomes too dry and hard, cows are receiving too much "dry matter" and not enough protein. Both of these indicators tell us the cows are currently doing well in the four-foot-tall weeds and grasses.

The picture below on the left shows a good manure paddy - an all important currency on a grass farm. The picture on the right is pasture where weaned calves are now grazing, which is the best feed on the farm. 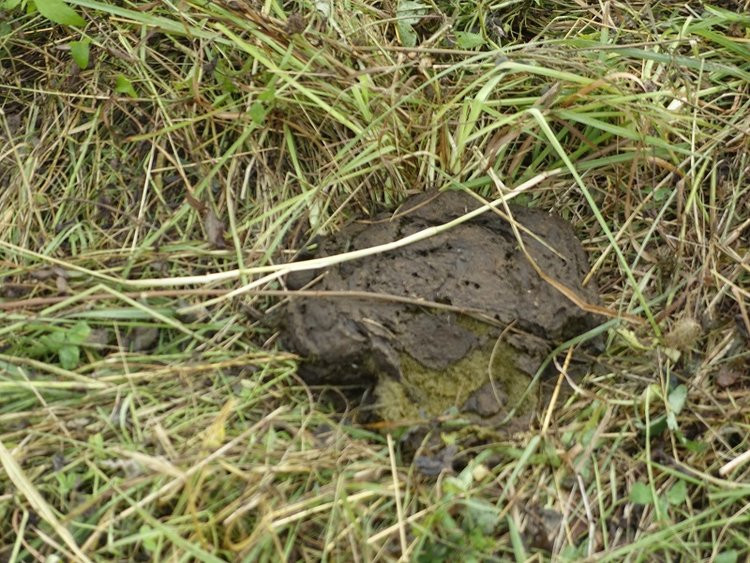 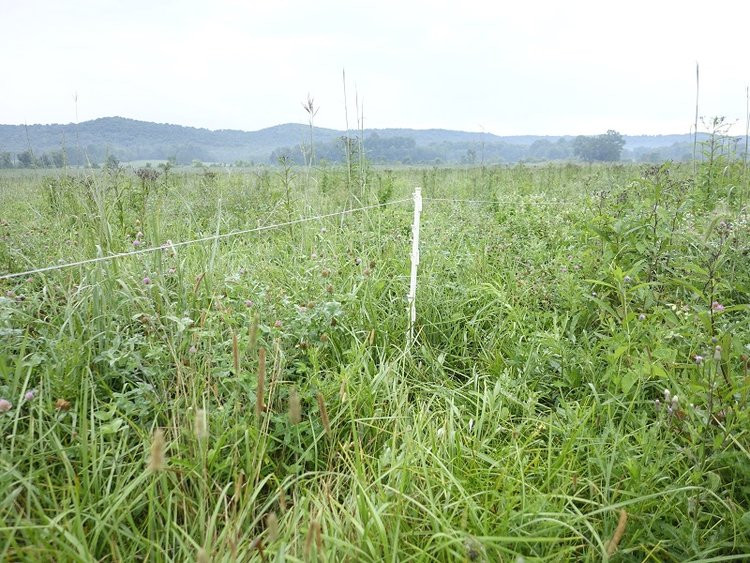 We have started another batch of Berkshire hogs, which should be ready in about 4 months. In the meantime, we are out of bacon, which is a serious omission for our bacon-lovers. The challenge is that bacon constitutes only 10% of the animal, which makes it hard to gear up for sales of bacon, until outlets are found for the other 90% of the animal. To that end, Susan is creating a recipe for "Pork Ragout", which includes ground pork, soy sauce, ginger, pepper paste, and other sundry herbs and spices, creating a delicious and easy "ragout" to go atop rice or noodles. Hopefully, this fall, we will be organized enough to introduce this tasty new product. If we find some success with it, we will buy a sow or two and begin raising our own piglets. 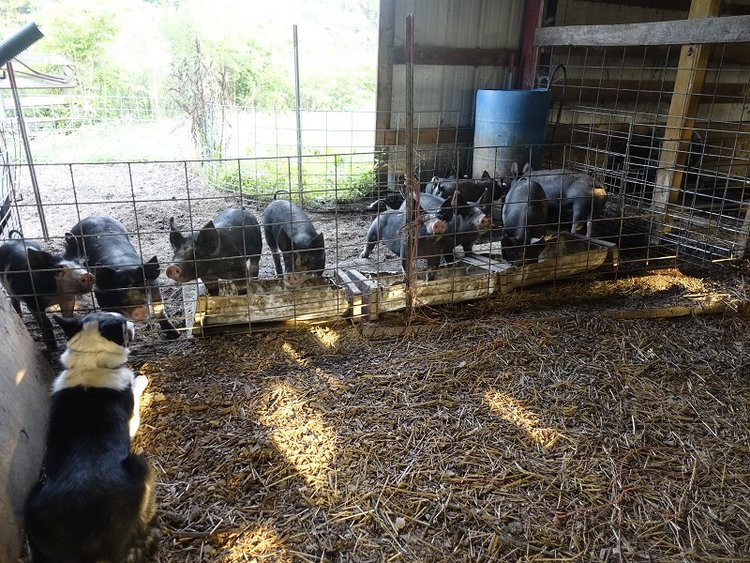 As promised, below is a picture of the "bouillabaisse" Susan prepared for her birthday. It tasted otherworldly - an exotic combination of the ocean and heavens. It was truly extraordinary, by almost any standard. This fish stew stems from Marseilles, France, but originated further along the Mediterranean in Greece. What is exceptional is the concentrated fish broth, that delivers an upward spiralingecstasy, which land-based foods can not provide. Alexander Rostov would have been proud.

Lest you are concerned Susan's cad-of-a-husband just showed up on her birthday to eat godlike food, you can be reassured her negotiating skills, refined daily in the court-room, exacted a handsome price for that privilege. She shamelessly looks forward to his "making good". Oh, the trade-offs of life... 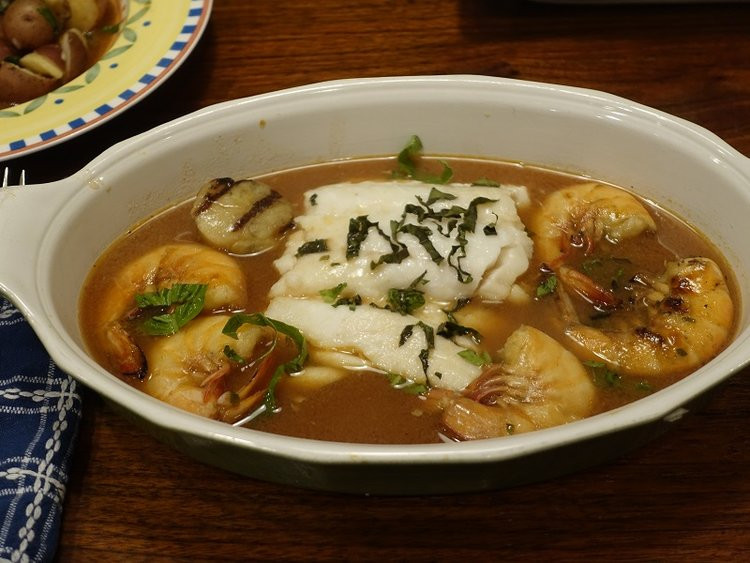 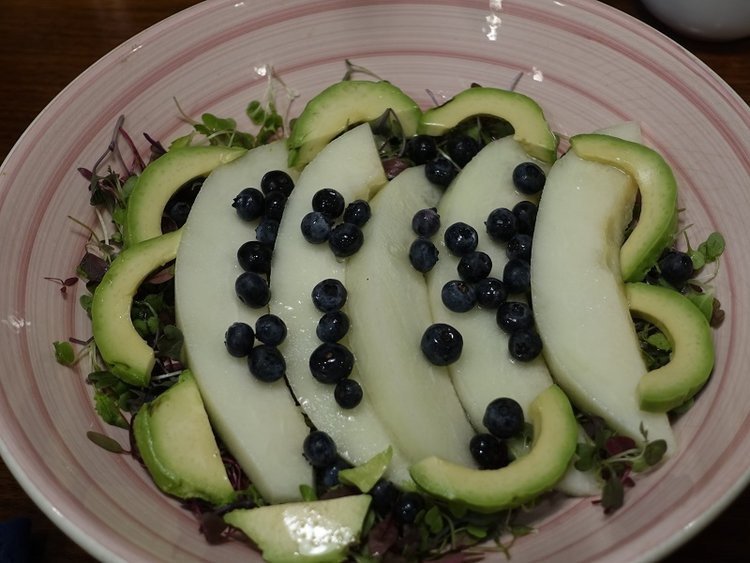 We are smoking capons again this week. If interested in a whole (4 lbs) or half (2 lbs), please send an email confirming such. Last week, we received more orders than we could accommodate. We hope for the same this week.

On Monday evening, we are making a delivery to Columbus for the first time. If you know of discerning souls there who would appreciate grassfed foods, ask them to send an email to us over the weekend to place an order, so they can participate in the drop-off.

We look forward to seeing you on Saturday and Sunday at Findlay Market, Sunday at Hyde Park, Monday in Columbus (!), and Wednesday at Blue Ash.

May your grass grow tall and your rumen be filled, 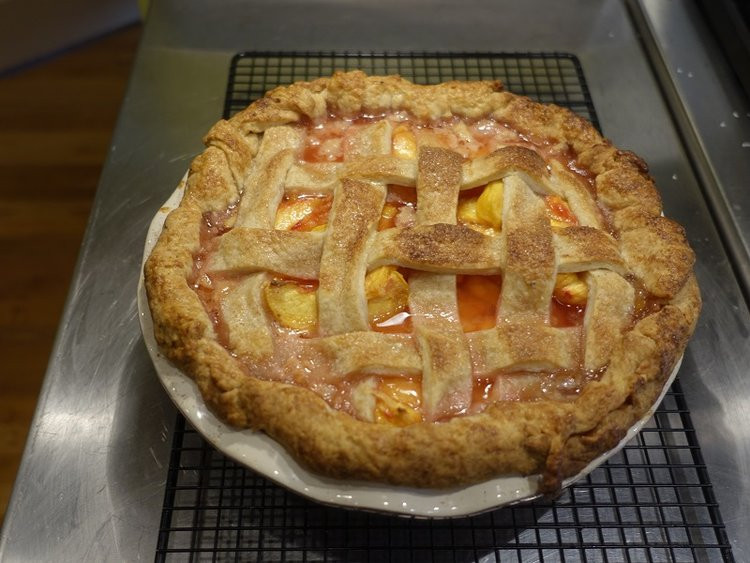 JULY BIRTHDAY: TODAY IS SUSAN'S 65TH, AND LOOK WHAT THE FLORIST BROUGHT - 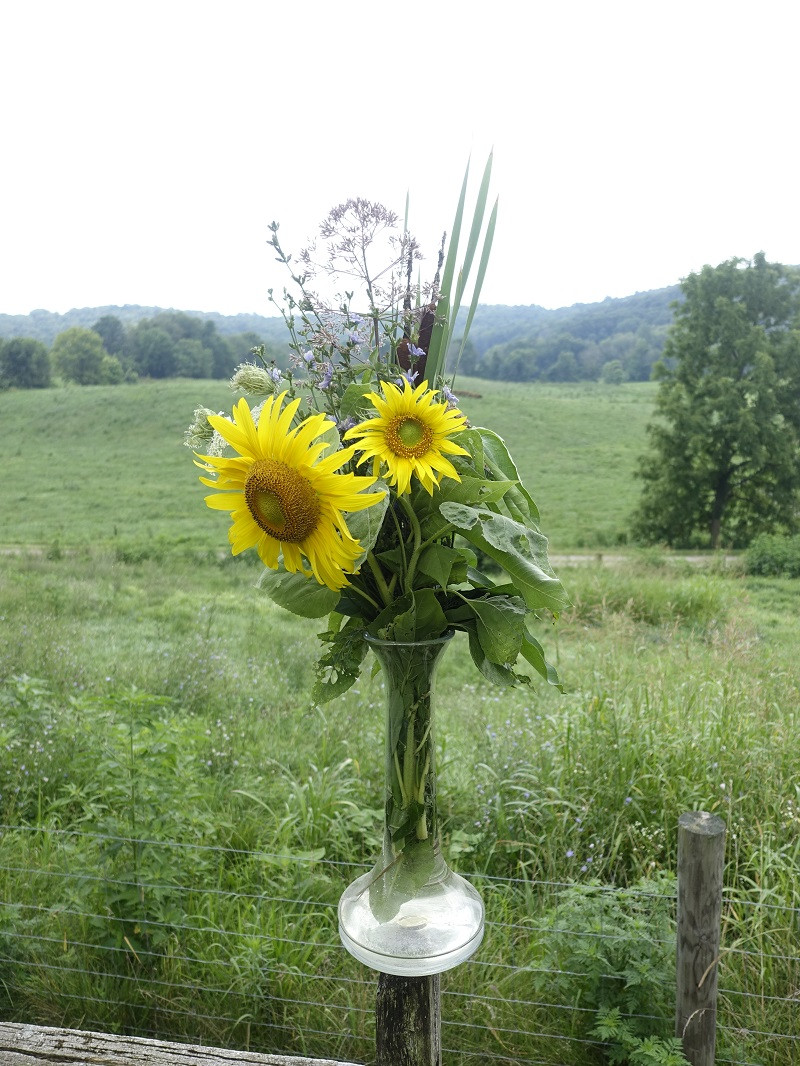 COOL OF THE DAWN: THESE DAIRY COWS ARE ENJOYING EARLY-MORNING GRAZING. 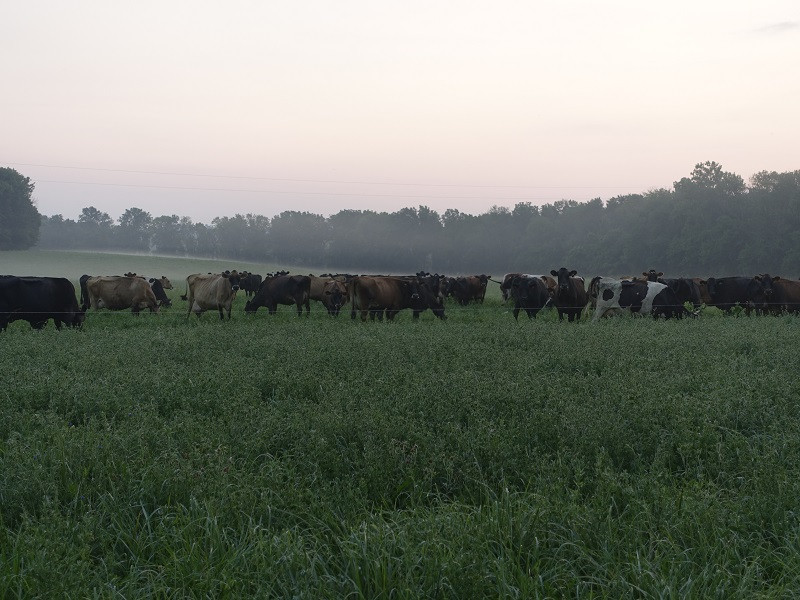 ONTARIO TERROIR: MAPLE SYRUP IS TO CENTRAL ONTARIO AS GRAPES ARE TO FRANCE. 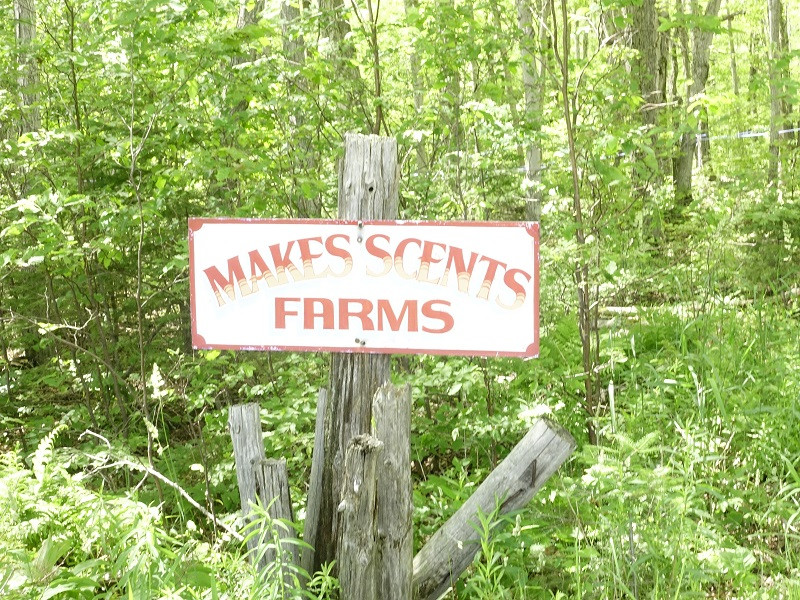