POWER OF CARBON: ALL LIVING ORGANISMS ARE PART OF THE "CARBON CYCLE". 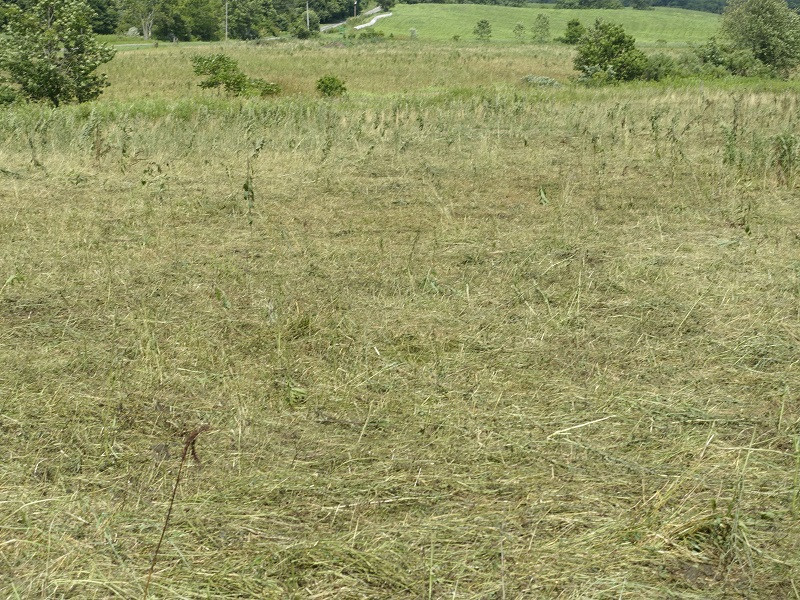 ALL LIVING ORGANISMS ARE PART OF THE "CARBON CYCLE".

This pasture was three feet tall just before grazing. Half was grazed and half trampled onto the ground, creating a mulch that enhances the carbon cycle. The carbon cycle is the movement of carbon from the atmosphere to soil (and oceans) and then back to atmosphere. This cycle, when unimpeded, is at the heart of healthy ecosystems. It keeps our soils rich with biological activity and the food therefrom dense in nutrients. It has been refined by Mother Nature over the millenium. Humans are about 18% carbon, and all animal life is dependent on the movement of carbon through their systems. When this elegant cycle is interrupted, problems arise.

Conventional agriculture was the first to interfere with the carbon cycle. In about 3500 BC, the wooden plow was put to use. Tillage of soil releases carbon prematurely, increasing load of carbon in the atmosphere while decreasing it in soil. This impact upon the carbon cycle accelerated over the succeeding 5,000 years. Tillage agriculture generated a lot of food in the meantime, but goes down in history as the first significant polluter of the environment.

Domestication of livestock also upset the natural carbon cycle. Confinement of cattle and sheep began around 4000 BC., degrading pastoral landscapes and releasing carbon form soils into the atmosphere. This practise of management reached epidemic proportions over the past 150 years, resulting in vast deserts throughout the planet.

The industrial revolution arose in the early 1800's, extending into the 21st century. During this time, fossil fuels were discovered and mined to generate heat, becoming the centerpiece for production of powerful and plentiful energy. The result was over the past 200 years, tremendous amounts of carbon, in forms of coal and oil, were harvested and burned, depositing abnormal amounts of carbon dioxide into the atmosphere. This set the stage for the climate change and global warming we are experiencing today.

So, tillage of soils, confinement of livestock, and burning of fossil fuels all have radically impacted the carbon cycle. Why do we care? Well, because too little carbon undermines the ability of Nature to function and too much carbon in the atmosphere will kill us! It is a potent element to be taken seriously.

And how is this relevant to your dinner table and our activities at Grassroots Farm & Foods? It is relevant because a herd of bovines, tightly bunched, delivering over 100,000 lbs of weight per acre, and kept in constant movement across a landscape, both rebuilds degraded soils and pulls excess carbon out of the air to store in roots of plants. It does this while providing nutrient-dense food as a by-product. This is an amazing feat that restores the carbon cycle and is unmatched by modern technology, providing triple benefit to society.

An acre of soil six inches deep weighs about 2 million lbs. For every 1% increase in organic matter, within that acre, carbon levels rise by 10,000 lbs. That carbon comes from the atmosphere and from the plants trampled onto the soil. This builds organic matter, which holds water for plants. Levels of organic matter on our farm have increased by one third over the past five years, now registering around 4%, with a goal of 10%. Our herd of bovines is the only tool we know to employ to achieve that goal.

It has been said that civilization owes its existence to its topsoil, from which its food comes. That remains as true today as ever.

When you buy food from Grassroots Farm & Foods, you are restoring the carbon cycle and building organic matter in Pike County, Ohio. That is a profound thing, and you are our partners in this process, for which we are most grateful. 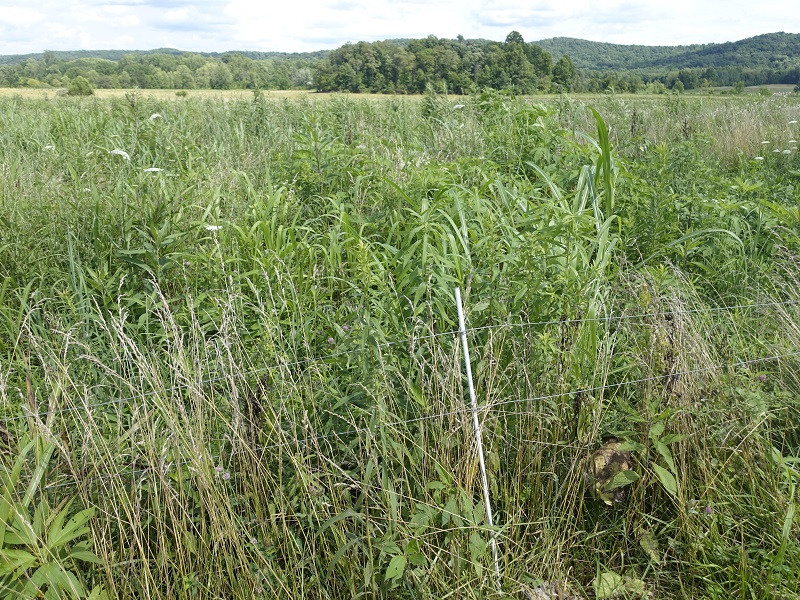 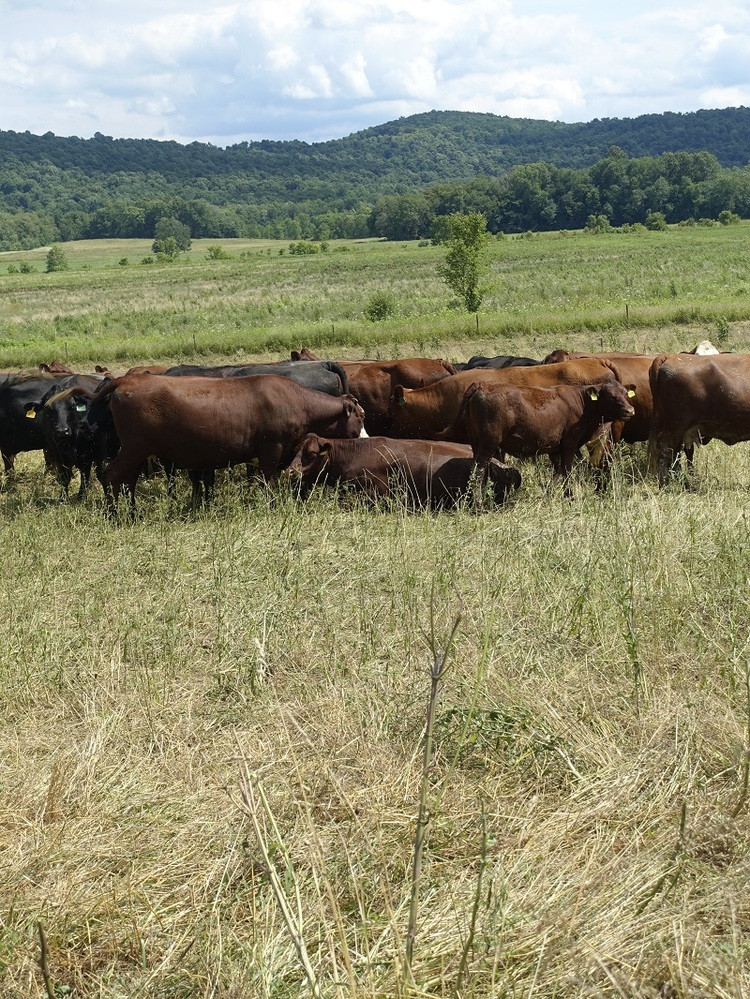 We enjoyed a restful week in Ontario, paddling a canoe, reading, and sleeping more than expected. One morning we set off to paddle around an island. We were greeted at the outset, by a big bald eagle (white head and tail), alighting from the rocky shore 20 feet in front of our bow, with a fish in its claw! It was a powerful and dramatic sight. Neither of us had seen a bald eagle that closely, making that experience the highlight of the trip. 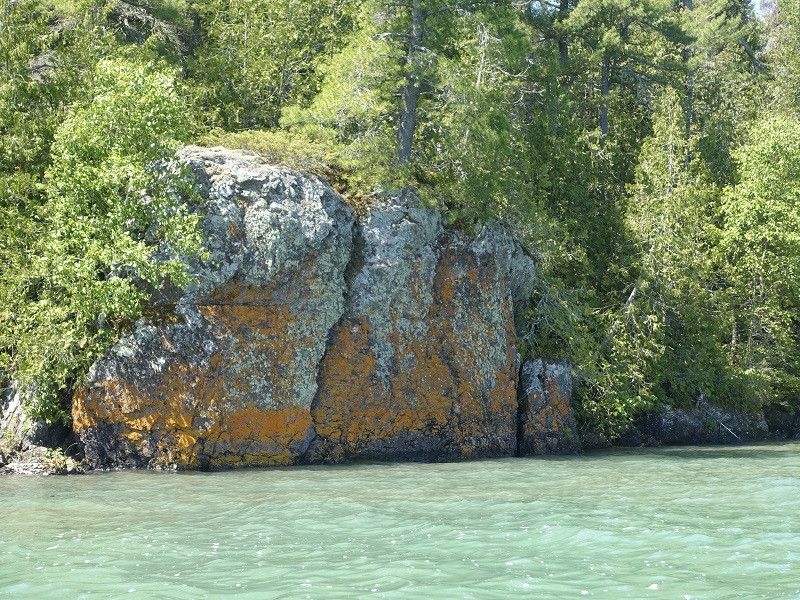 Yesterday we received a visit from the Ohio Department of Agriculture. The gracious woman said she was following up on an anonymous "complaint", that we are selling prepared foods from our kitchen, which had not been "inspected". I replied that is correct, and it is my understanding if one is only selling to the retail market, rather than wholesale, one doesn't need an "inspected" kitchen. I was advised to call the Division of Meats at ODA to confirm, which I did and the understanding was confirmed.

So, what is going on here? Somebody is feeling threatened and wants us to cease doing business. I suppose we should take that as a compliment. At least they are noticing all the hard work. And they might further take note we are not going away. If the kitchen needs to be fixed in this way or that, we will do so. The critical factor is we work hard to produce food of high integrity and a growing number of customers are validating the effort. We and others have invested too much to turn back now. So, forward we go, into the competition! 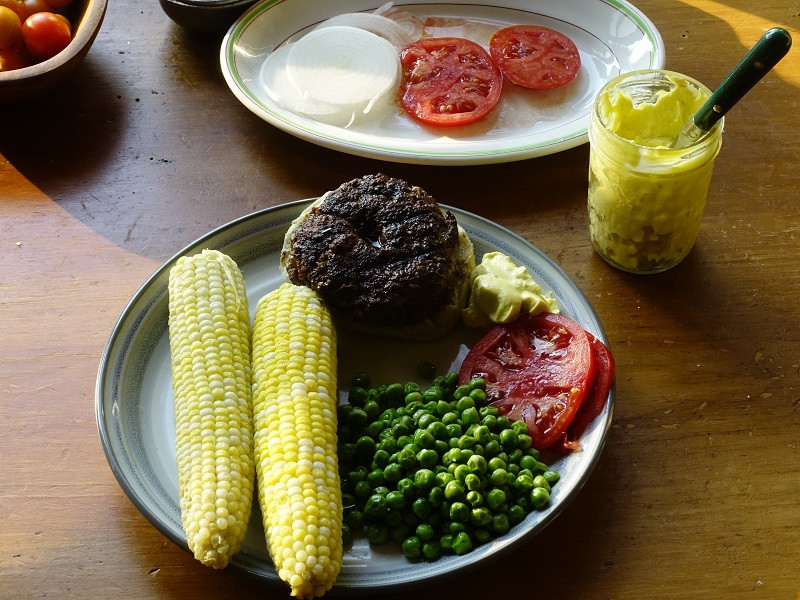 A great summer meal - first ears of corn, fresh peas, fresh tomatoes, homemade French mayonnaise, and an irresistible Short-Rib Burger... It is hard to do any better than that.

On-line ordering for delivery 7/24 is available by going to:

For those interested in bulk purchases of meats, they can be ordered by going to:

We will see you this Saturday in Milford and on Sunday in Hyde Park.

May our carbon cycles flow unimpeded! 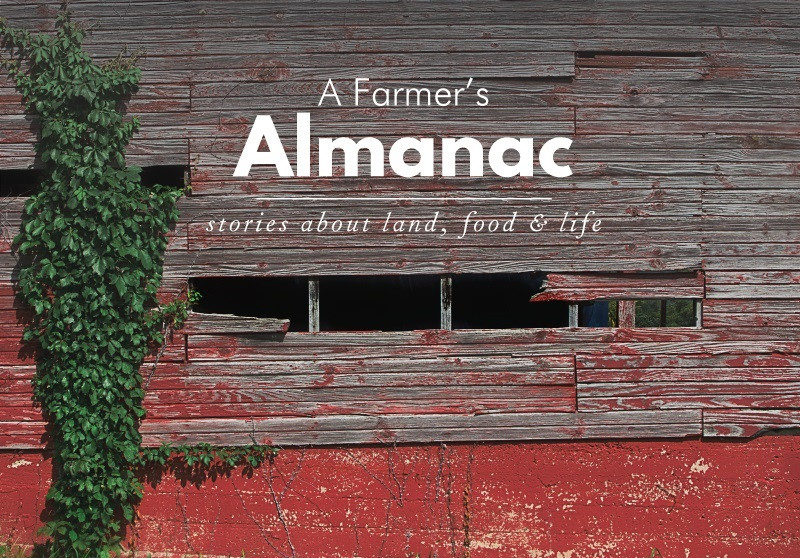 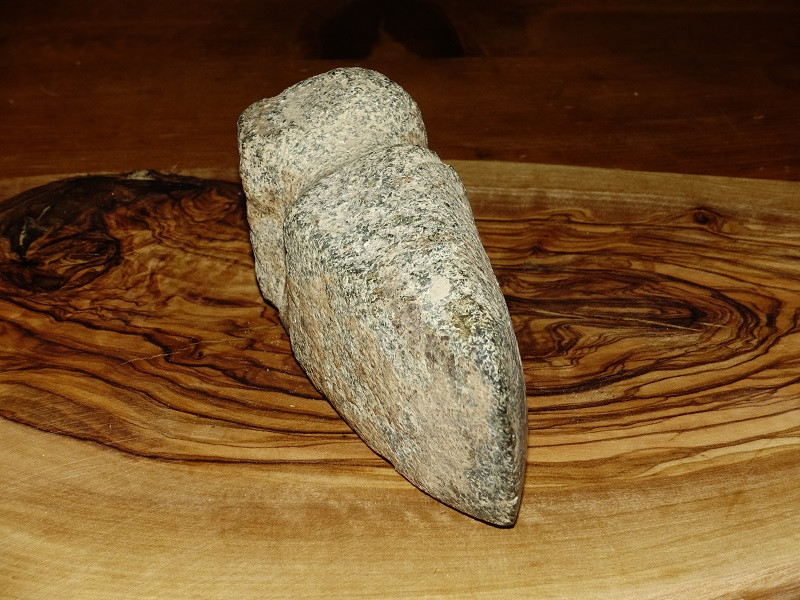 POWER OF WATER: WATER IS ONE OF TWO ESSENTIAL RESOURCES. 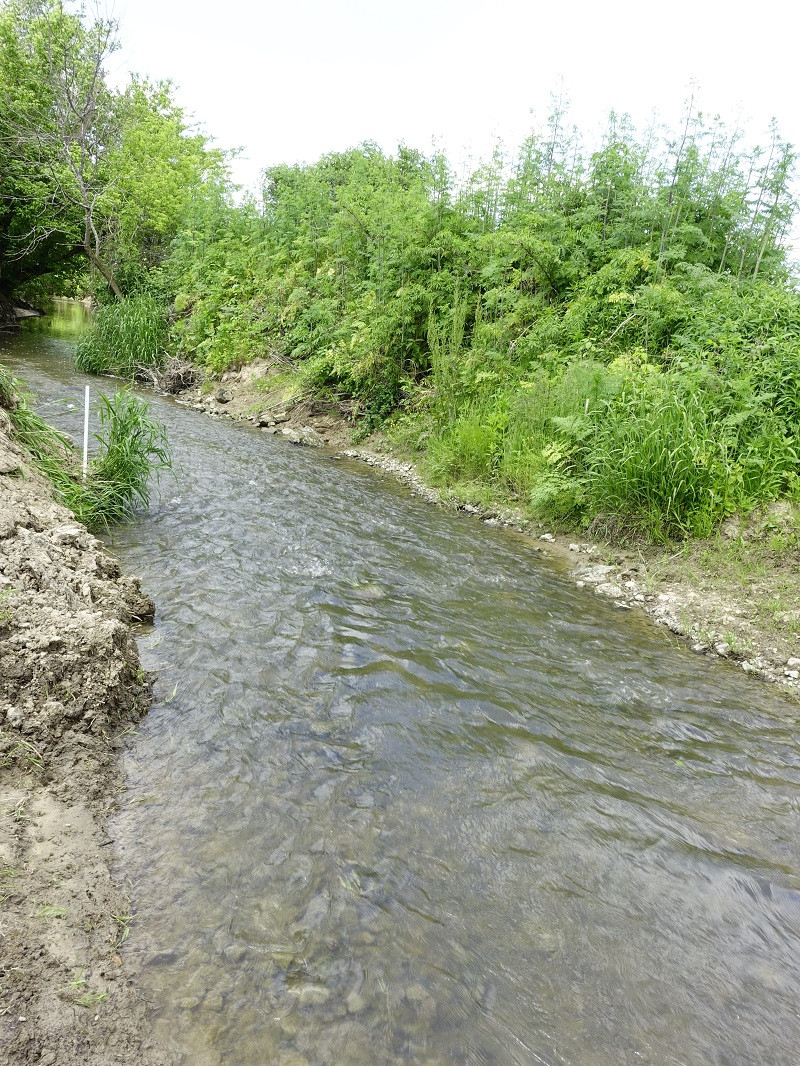 ASTRAL INTERVENTION: MERCURY IS "RETROGRADE"! WHILE THIS MAY BE EVIDENT TO YOU, IT ESCAPED MY NOTICE, UNTIL EMPHATICALLY POINTED OUT BY MY BETTER-HALF. 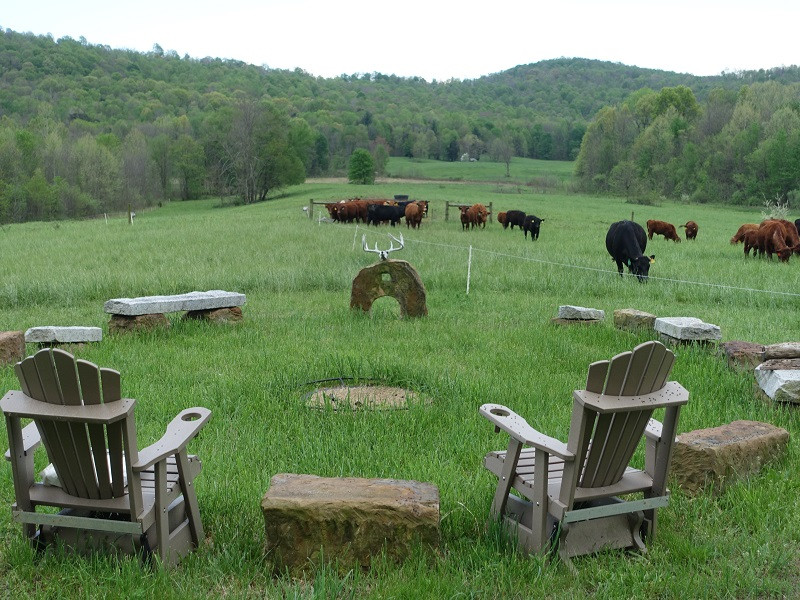