You and we have written a book!

A Farmer's Almanac is finally ready to go, a year later than envisioned, but slow publishing seems to come with slow food. This book offers a nearly random assortment of our newsletters -- 71 of the 300 or so that have been written. You, our customers, are the protagonists, for without you these would not have been penned. Without you, none of the considerable effort undertaken on our land would be underway -- we would be lost in a sea of commodities. But you are blessedly present, supporting and encouraging us. This book represents some of the tale of the journey you and we have been on together.

These are heroic and humble tales, for the amount of work invested, for the learning curves climbed, for the artistry of food presented, and for your faithfulness in showing up week after week at markets in support. These are the tales of a community of people working together to make a difference. And that is how change is realized -- through the efforts of local networks, such as this. These stories recount the uneven pace of making a difference, the great struggle required, the sense of failing while succeeding, of going backwards in order to advance. These are stories of love -- love of land, animals, food, and the people who care for it all from beginning to end, including yourselves.

It is humbling to play a part in this symphony. May this work bring music to your ears, warmth to your heart, nurture to your belly, and direction to your feet.

We will have copies to sell at the market and the book can also be ordered on-line, through our new Gift Shop.

We enjoyed a memorable Farm Tour several weeks ago. The weather was beautiful, food fabulous, scenery breathtaking, and people wonderful. Preparing for farm tours has typically inspired new recipes from Susan for her soulful kitchen. She is now working on All-American Beef Stew, which was served for the ocassion. It was excellent, and as soon as we can induce Susan's creative spirit to record the details of the recipe, so it may be duplicated, we will have it for you at the market.

The day after the tour, we received the following from Beth  S.:

I love the time between eyes opening in the morning and actually getting out of bed.  This morning memories of yesterday ruminated in my mind.  What a wonderful day.  The crisp fall air and sunshine set the stage for an excellent visit.  The biggest takeaway was the extraordinary care and love you offered to the animals and the land.  Susan’s outstanding meal was one more example of how much thought and energy went into the afternoon.  Our tribe couldn’t have felt more nourished by your tour.  I hope each participant went home with new knowledge, understanding and appreciation for the planning and work that goes into one’s sustainably purchased meat and a commitment to spread the news.  With gratitude and appreciation, Beth, Molly, Beth, Drew and Graeme

A few days later, we had a visit from Wally Wulsin, an aspiring grass farmer, and his parents. Their visit and Beth's comments are manna that keep us going.

Kathy and Paula continue to harvest seeds from our wetlands for use in the coming year. This is all handwork, and they have done a skillful job of surgically harvesting without damaging this vital ecosystem. The tubs above are filled with False Nettle. The sheets above harbor seeds of: Joe Pye Weed, Woolgrass, Button Bush, Wing Stem, Water Plantain, Penstemon, Seed Box, Swamp Rose, Common Wingstem, Nine Bark, Cinna Grass, Cardinal Flower, Blue Lobelia, Monkey Flower, and Agrimony. Under Jacob's tutelage, Kathy and Paula are becoming experts at their task. Theirs requires a keen eye, light touch, decisive movement, and tireless back. They are becoming goddesses of wetlands.

There is something profound about this work -- careful harvesting of Nature's wildest seeds for protection over winter and planting the next season. (It is reminiscent of Native Americans harvesting wild rice in the swamps of Minnesota.) These seeds will go onto new lands being restored to wetlands next year.

Because of the dry and warm fall, colors of trees are muted on the hillsides. The exception is this great maple, abutting our house. We take this exception to be an omen to persist in the journey.

We are increasingly hearing about fake meat. Pat Brown is a retired geneticist, from Standford University, who recently started a company called Impossible Foods. Its goal is to eliminate the desire or need for meat, claiming that doing so will address our largest global challenge, which is climate change and a warming planet. He has garnered hundreds of millions of dollars in venture capital to manufacture in laboratories a vegetarian burger of equal taste to a hamburger. He is on version 3.0 (like a software update) and believes he is close to the goal.

Once accomplished, he envisions the meatless burger replacing the hamburger and bringing demise to the suspect cattle industry and Concentrated Animal Factory Organizations (CAFOs), which are net emitters of methane and gross consumers of precious resources like water.He foresees providing meatless product to fast food chains in this country and every other, including China, expecting to replace one massive industrial production and disribution system for food with another. Once cows and other livestock are no longer in demand, they would be elimated from the landscape, which would be replanted to trees, generating massive resevoirs to store carbon. All neat and clean.

CAFOs do need to go, and the sooner the better. They produce toxic food that  adversely impacts the health of people and the environment. But cattle are not the problem; the problem is the management-paradigm employing cattle on concrete as a means to produce food.

Cattle need to be relocated to their natural environment which is pastures and prairies, and managed as we do ours, in continual movement. They do emit methane, but in this system they sequester more than they emit. In so doing, they build organic matter in soil at rates and scale far in excess of those achieved by vegetable production.

If we eliminated CAFO's and replaced midwestern grain production with pastures filled with cattle, sheep, hogs, and hens, we'd produce less meat, but it would be of far higher quality than currently produced, and we'd be sequestering carbon and water on a massive scale. Each one percent increase in carbon sequesters 10,000 lbs of carbon and 20,000 gallons of water. If we took the soils of the vast midwest from 2% organic matter to 10%, we'd have our carbon problem nearly solved.

Two thirds of the world is grassland, where trees do not thrive. Much of these areas are desertifying through mismanagement. The only way to restore those grasses is through proper management of livestock, as with midwestern praires. Planting trees on the steppes of Mongolia is a waste of time and money.

Soil is the foundation upon which civilization stands. Commercial systems producing massive amounts of vegetables, as envisioned by Impossible Foods, deplete soil, which depletion is offset by importing synthetic fertilizers. This is unsustainable over the long run. The only way to regenerate soils on a large scale is through addition of migrating livestock to the ecosystem.

This Impossible vision is not localized. It thus does not build relationships and resiliance. The quality of product would be suspect, as it is continually updated by products from distant lands. It certainly would not be certifiable, thus reducing trust with consumers.

Last, food produced in laboratories can't compete nutritionally with food produced over tens of thousands of years of evolution between man and beast. Nature has been working on this problem a lot longer than has western industry, that is 100 years old at best.

So, while venture capital flocks to an impossible vision, we stay our course, feeling illuminated by the maple tree and reassured by the stories you and we have woven together articulating that local soils producing natural foods for local families will sustain itself far into future.

Last night's dinner was a soup of: chicken broth, chicken sausage, kale, and potatoes.  And cornbread, with lots of butter! Very simple and very good.

This coming Sunday is the last day on the Square in Hyde  Park. We move next to Clark Montessori, 3030 Erie Avenue, through next May.

Order your Almanac here, or send an email and we will bring a copy for you to the market.

May our stories be entwined far into the future, generating many more almanacs to come. 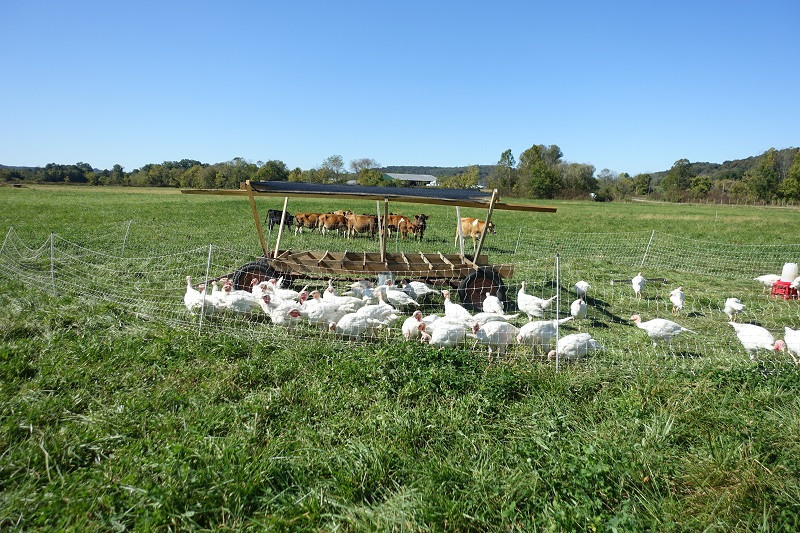 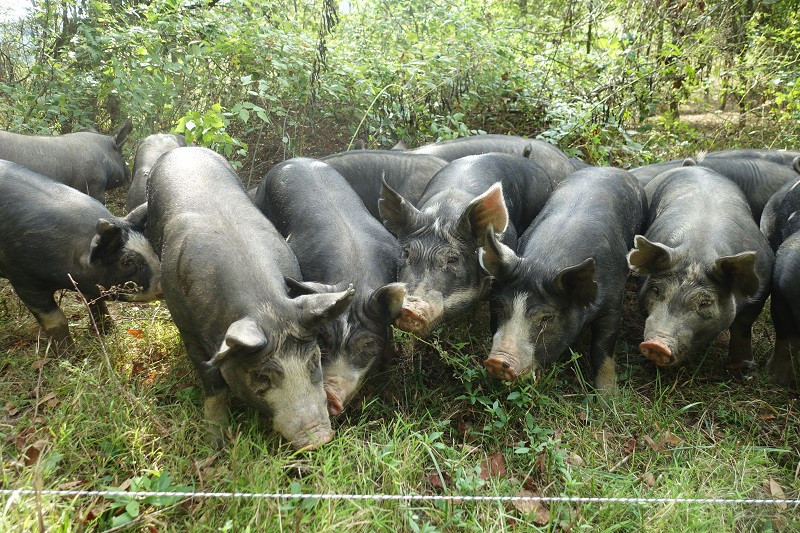 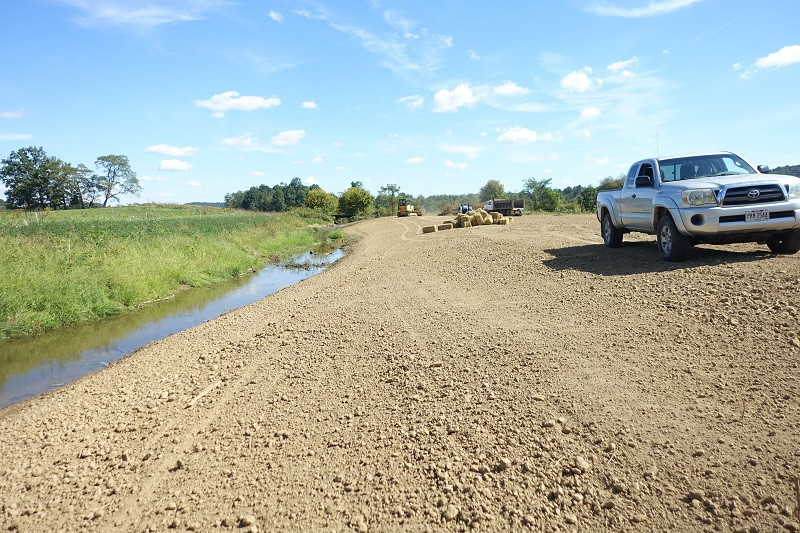