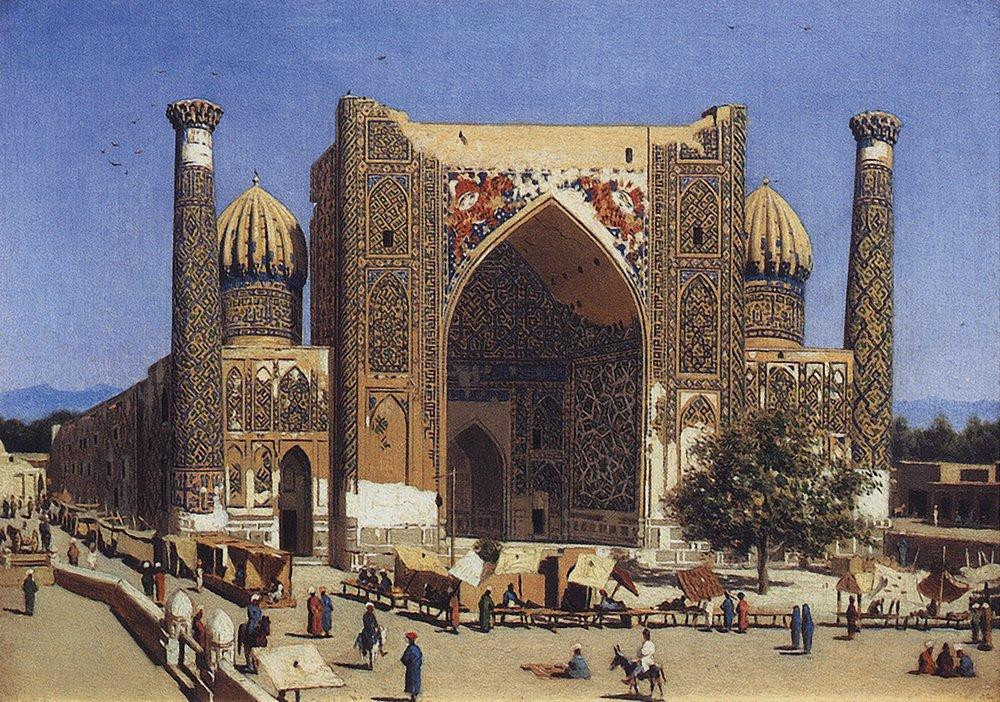 With the advent of agriculture in the Middle East around 10,000 BC, surplus commodities enabled producers to begin bartering for goods to improve quality of life. Marketplaces began to be formed to facilitate such transaction, and amazingly they continue to this day, throughout the world, in nearly identical form. Vendors arrive at dawn with surplus goods in hand, set up shop with tent and table, and spend the day exchanging currencies, hopefully for the better by dusk.

The Agora of Athens, was "a gathering place", built in the 6th century BC, not only for the exchange of goods, but also for military mustering, political discourse, and philosophical debate, serving as one of the seedbeds of democracy. Samarkand (above) on the "Silk Road" in Uzebekistan was built in 700 BC by the Sogdonian peoples. The Sogdonians allowed any foreigner to settle in the vicinity, as long as they abided by laws-of-trade. Greeks, Turks, Mongols, and Chinese reveled in the prosperity that developed at that site, and each made Samarkand capital of their empires over time. Trajan's Market in Rome (first century AD) was notable for being five stories tall. The Grand Bazaar in Istanbul was built in 1455 AD to include 4,000 shops and 26,000 merchants. Timbuktu (Mali) became the largest marketplace in Africa, as it stood at the intersection of the Arab nations to the north and the African empires to the south, "where camel met canoe." In the 1600's the Bazaar of Isfahan in Persia was constructed to include one mile of continuous vaulted ceilings. This Bazaar was so prosperous that Isfahan became the capital of two Persian dynasties over the succeeding 700 years.

These marketplaces stood at the heart of culture for regions they served. Not only were local goods exchanged, but also foreign ones, leading to exposure to diverse elements and broad perspectives. They also served as important locales for social interaction, when travel was difficult and socializing constrained. 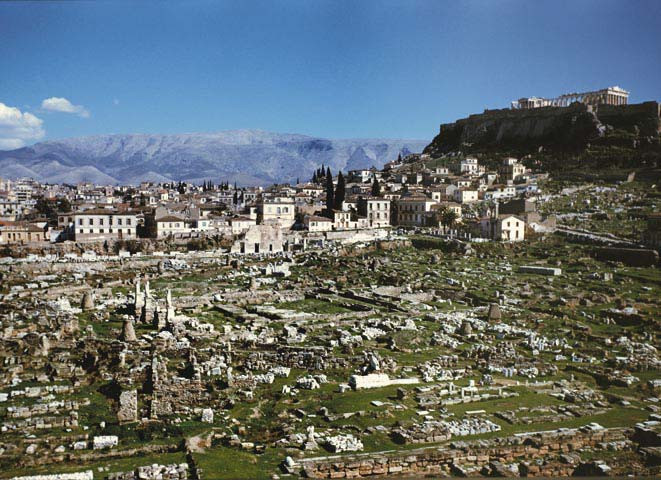 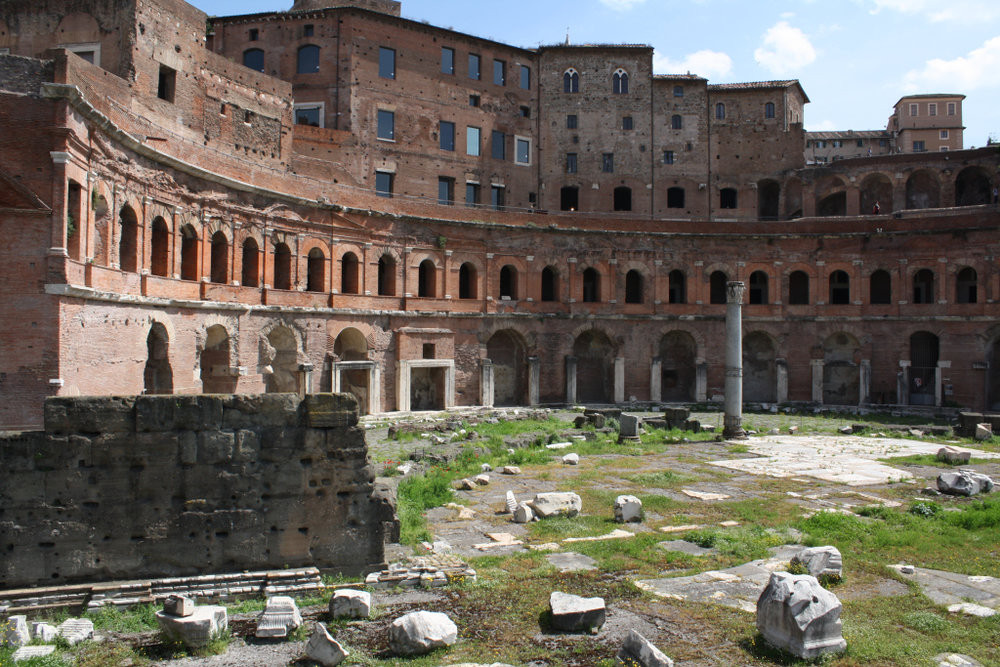 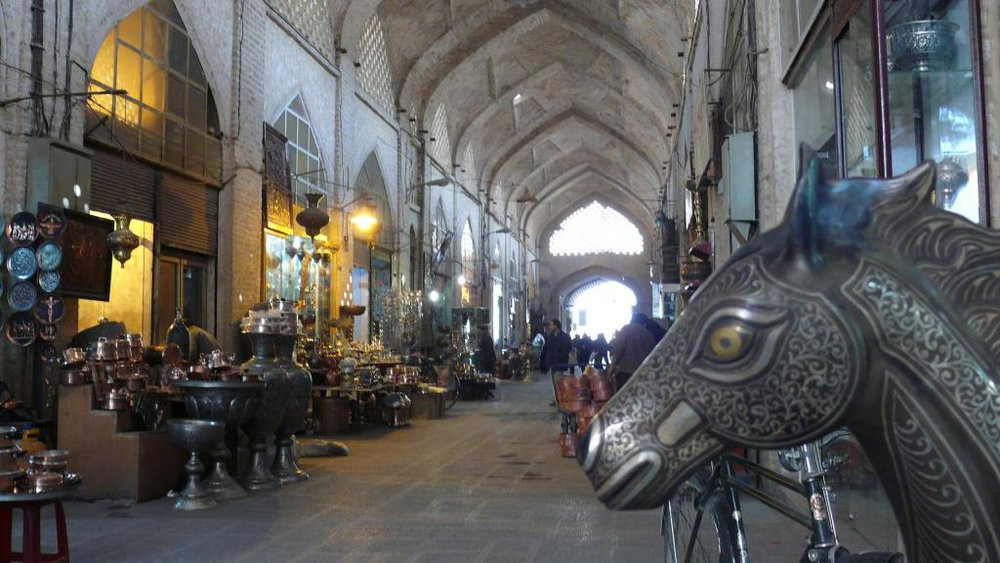 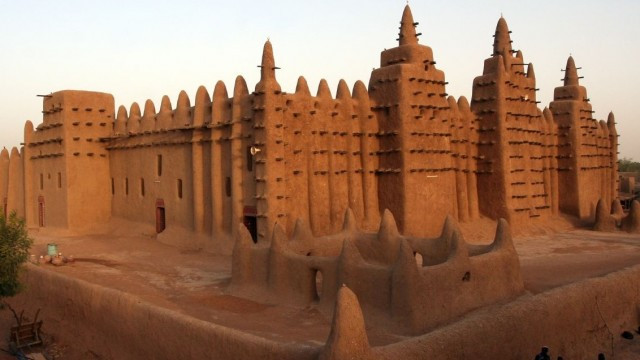 And then we have North American marketplaces, characterized by "the Mall". Edmonton, Alberta offers the largest market under-roof in the world, with 800 shops, 20,000 parking spaces, 3 amusement parks, and 200,000 shoppers per day! Many imitations of such have been built across the North American continent, in distortion of a true marketplace. Most of these malls are not standing the test of time, for they lack soul, heritage, and distinction. They are venues of tired mass-production, rather than purveyors of vigorous, local excellence.

Markets that have survived the ages, such as Findlay Market in Cincinnati, plus the advent of farmers markets across the country, speak to an unfulfilled need in American society. That need is for food consumers can trust, produced with excellence and craftmanship. These are old-world values, which have stood the test of centuries, and are finally taking root on this continent.

There are problems with farmers markets. They are unreliable, due to weather and competing local events, making for a difficult business model. One has to transport excess inventory not to disappoint potential customers, which is inefficient. Too many customers disappear during winter. It is difficult to "scale-up" the business through this venue of face-to-face transaction.

But they offer many virtues. It is a great place to start a business and introduce products to a lot of people. Customers become friends, as one discusses the implications of nutrient-dense food on life. And one becomes a part of a community of outstanding fellow-vendors and farmers, where invaluable mutual support is extended and received. Susan and I benefit a great deal from these virtues and are grateful for the opportunity to participate in this ancient tradition of the physical marketplace. We accordingly thank Mary Ida Compton and Judy Williams for their effective leadership of the Hyde Park Market over the past decade. Such leadership is a profound contribution to society. We thank our fellow farmers, whose high character and extreme work ethic delivers cherished excellence, for which our culture is hungry. And we thank invaluable customers, whose discerning eye and faithful presence keeps the wheels of old-fashioned commerce turning.

As fast-paced technology continues to dissolve distances and relationships in current society, it is likely that face-to-face interaction over local food will become all the more sought-after and necessary. It appears the ancient marketplace may stand forever, and praise be to it! 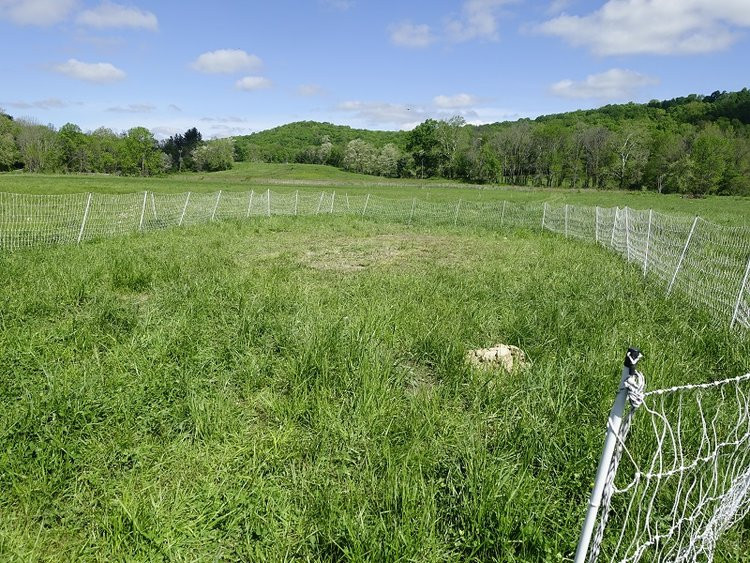 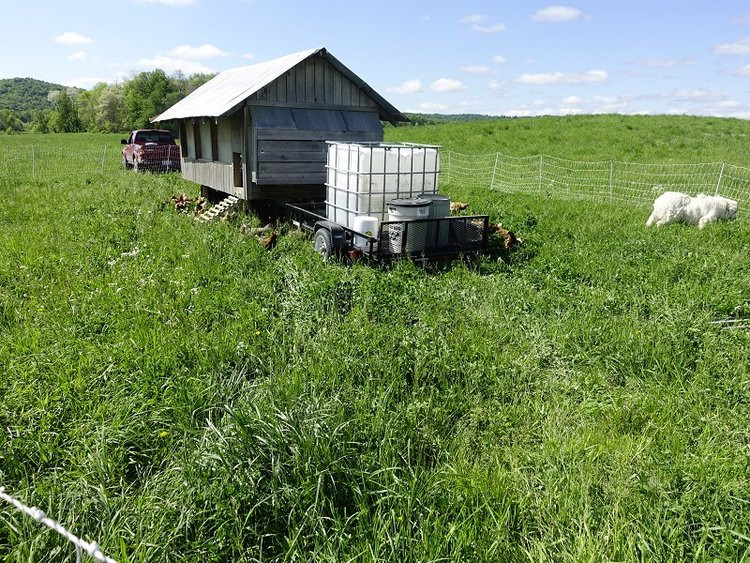 Laying hens make quite an impact on pasture. Our new pullets were in the top section for a week. We moved them yesterday to fresh clover and grass. We have spent a few evenings tenaciously transferring somnolent pullets from beneath the mobile coop to the inside, so they learn where home lies. 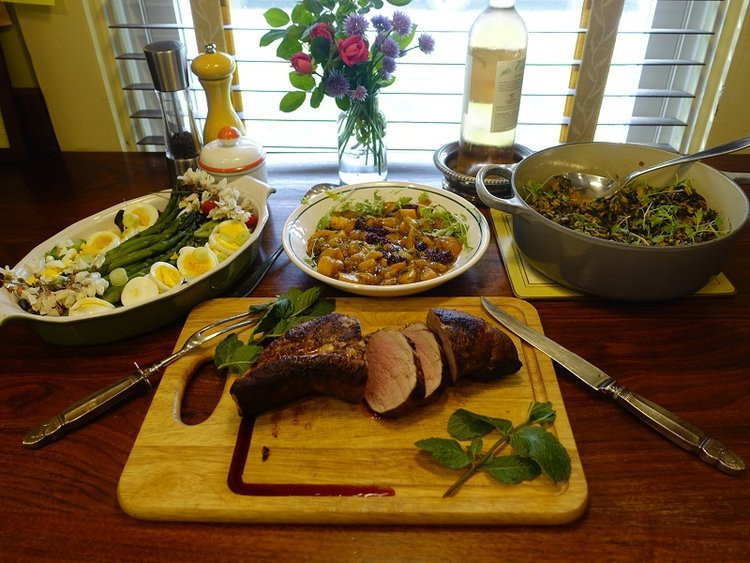 This meal came from the Hyde Park marketplace, featuring Grassroots pork tenderloin, Walnut Ridge asparagus, and chard and locust-blooms from Farm Beach Bethel. The fruit compote consisted of mangos, blackberry, and honey. It was a fabulous meal. The night before we enjoyed fresh asparagus soup, the base of which was pastured chicken stock. You, too, can dine primarily from your local marketplace, in concert with tradition thousands of years old. 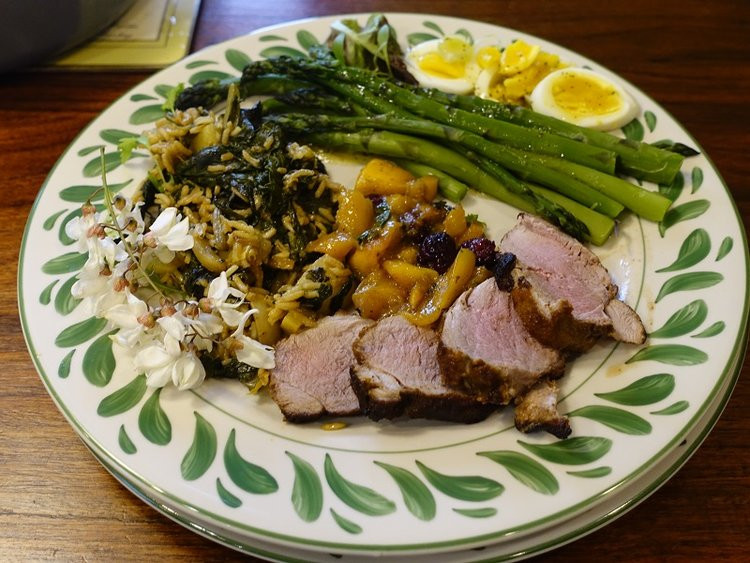 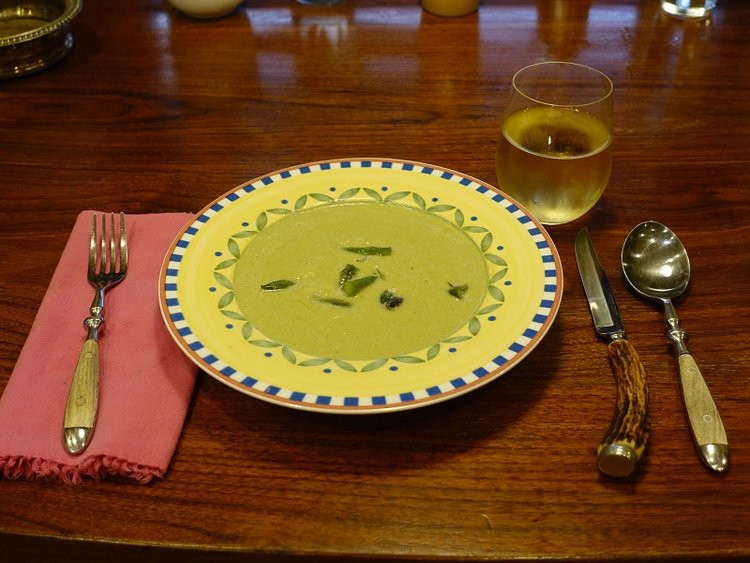 As you recall, pigs will be flying through Hyde Park this Sunday, so vendors will not be present with wares. Beth & Bob will be at Findlay Market, however, on both Saturday and Sunday. We also look forward to dropping off in Milford on Wednesday afternoon May 17.

Our Farm Tour is this coming Saturday the 13th, so final sign-up is this weekend.

In gratitude that you walk with us to maintain ancient tradition, 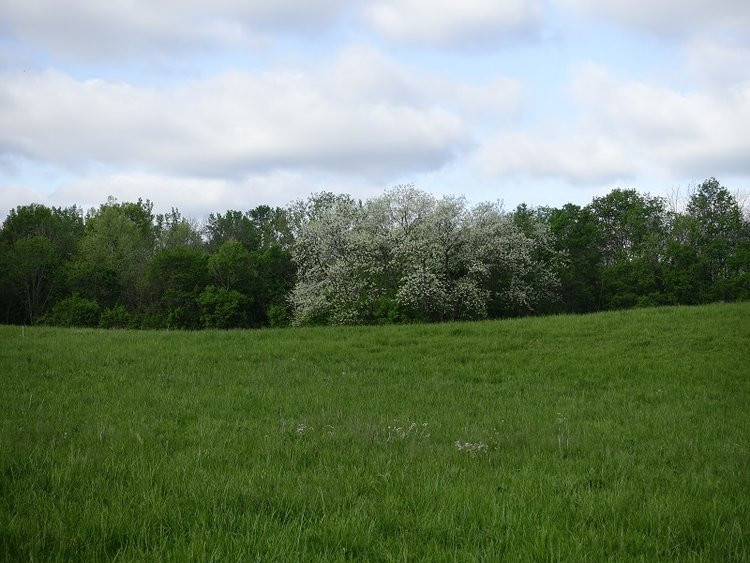 COLOR OF HOPE: THE COLOR OF HOPE SURFACES IN ALL NEW LIFE, BUT PARTICULARLY IN THE DOGWOOD TREE. 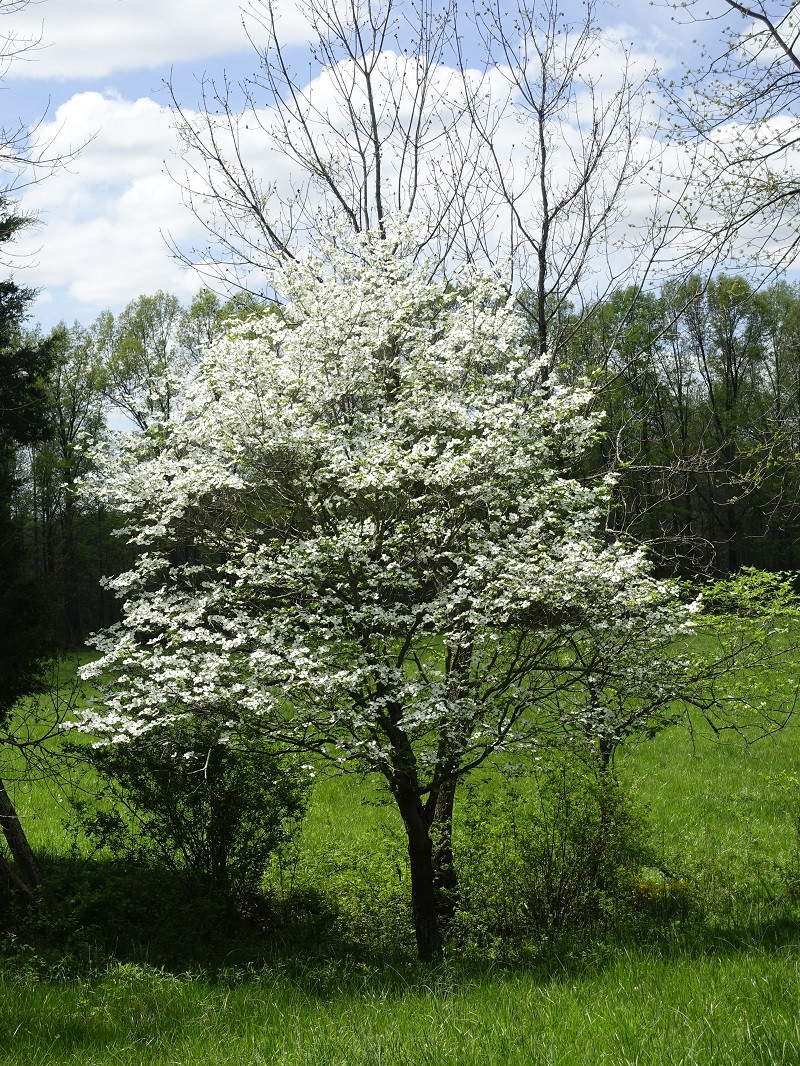 WALK IN THE WOODS: THE ONSET OF REDBUDS IS A HARBINGER OF RICHES TO BE REVEALED IN THE WOODS IN THE YEAR AHEAD. 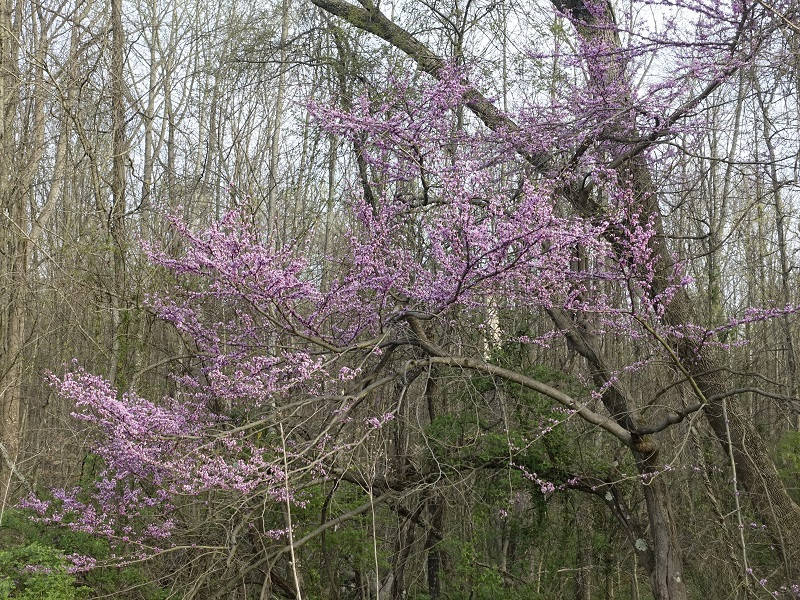 A DAY'S WORK: RESPLENDENT CLOUDS REMIND US TO PAUSE AND WITNESS. 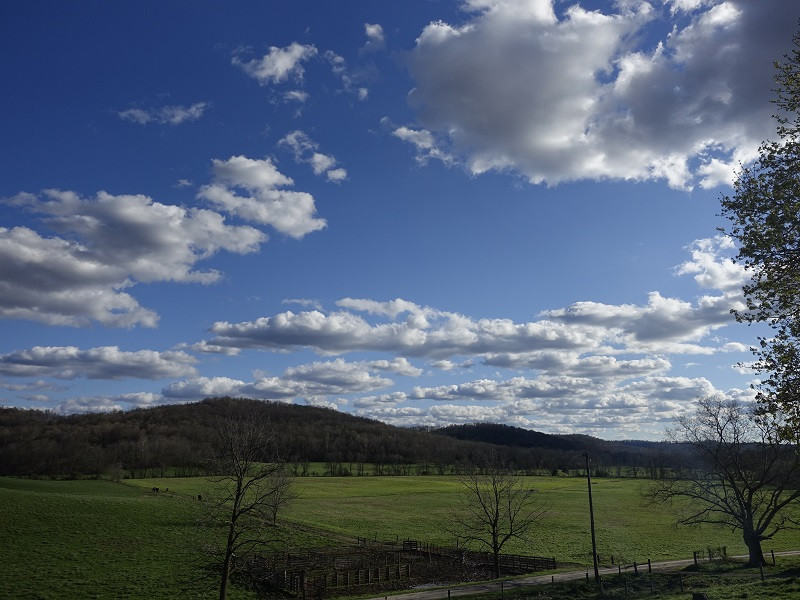