DIGGING DEEP: THIS WAS THE NINTH HOLE WE DUG, to solve the problem. 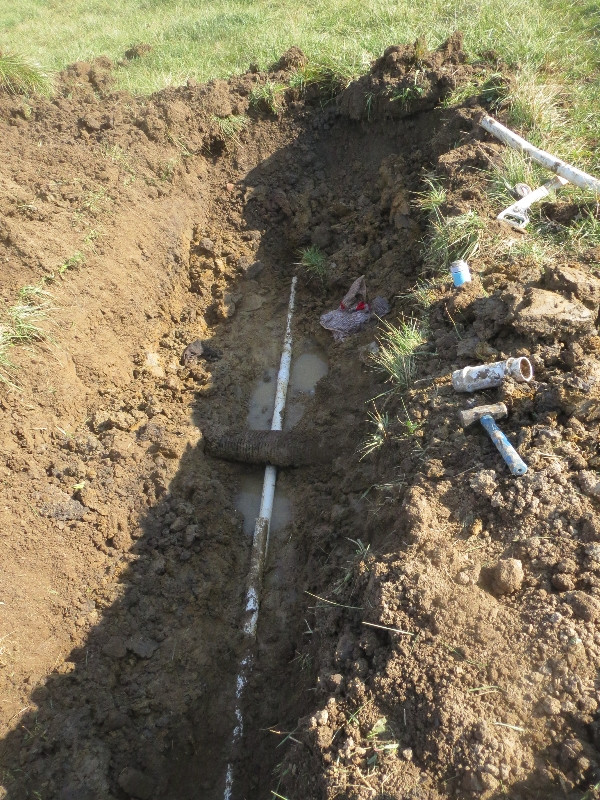 THIS WAS THE NINTH HOLE WE DUG,

to solve the problem.

The well-pump at the dairy wouldn't stop running, so we assumed a leak had sprung in the underground waterline somewhere. Even with 18,000 feet of waterline to trace, a leak usually announces itself through a large wet spot in the ground. We have always found leaks in the past, but this one was proving totally elusive.

Landis and I looked and looked and looked, but found no wet spot, which generated increasing anxiety. A crisis I dread is having the water system go down, with 80 heavily-lactating dairy cows standing by, looking at me, and needing to drink and be milked. Such crisis has to be solved immediately, even if it is pouring rain or 5 degrees below zero. A keen memory of misery in past is having to be four feet underground in a muddy hole in the cold rain repairing a water line, with numb feet and hands. I could see the same scenario unfolding in this situation, and resolved this past Monday to fix our problem before the weather turned inclement.

So, we called in the backhoe, and started where we discerned the elusive problem might lie - at the intersection of a tile line and waterline. The waterline could be leaking and the tile line would be directing the water away to the creek, rendering detection from above impossible. We did identify one tile line on the farm that was running, while all others were dry. So, we started with that tile line, and went to the first of two intersections with the waterline, and dug a four-foot by six-foot hole with the back hoe, only to find the expected intersection dry as a bone. Not discouraged, we proceeded to the second intersection and dug another four by six foot hole, to find it slightly wet but more from assumed ground water than a good-size leak.

Feeling stumped, but not deterred, we advanced ten feet forward along the waterline and dug two more grave-like holes, which also proved to be dry. This was beginning to look quite grim. But I came up with an alternate brilliant insight, so we raced over to the most obvious prospect of all, only to find the deep soil there dry as tinder. As desperation began to rise, it seemed prudent simply to keep digging, so we dug four more holes, each the size of a large sofa, all with the same result. By this time, the smile on the face of the backhoe operator seemed to be getting bigger and bigger, while mine had disappeared entirely. Hitting saturation point, I called it a day, feeling very frustrated and somewhat incompetent, wondering if in defeat one ought to admit defeat.

That evening, the specter of accidentally being buried in a muddy hole in January, trying to fix a waterline, motivated further insight. I went into my twenty-year memory-file, and suddenly realized that the tile line we found on the second dig was the eighty-year-old version made of clay, not the one we installed 20 years ago, made of black perforated plastic to replace the clay version, which was plugged and no longer functioning.

So, the next morning with high hopes, the backhoe operator and I returned to the second hole, moved ten feet back along the waterline, and dug deep to successfully find the elusive problem - water spurting out of a crack in the PVC directly into the tile line... What a relief! What a relief!

The leak was caused by the trencher that installed the second tile line above the waterline twenty years ago. The trencher put a dent in the PVC as it crossed it, and that dent eventually turned into a leak many years later. In the picture above, you can see the piece of dented PVC we cut out, lying on the bank to the right.

As mentioned, I felt tremendous relief at solving the problem. I also felt foolish for being so close on the second dig, but not realizing it was the black tile line we needed to find, not the clay one. But it had been twenty years since looking underground there, so we tore up more pasture digging seven more holes, and spent more precious money, time, and energy chasing our tail. But, in the end, we solved the problem. It is done; we put it to bed, and can now go on to more pressing matters, like marketing products.

So, why belabor this prolonged story and call on your precious time to consider it? Two reasons: first, it was a day in our life on the farm. Farm-life offers much romance, but it also offers many acute challenges like this one. Being willing to climb into mud holes six feet deep is part of what it takes to deliver good food to you.

Second, this is a story to which we all can relate - it is the story of life. We have to persist foolishly in the direction of our dreams, even when it involves making mistakes before others, being inefficient, and exhausting ourselves. We have to be willing to believe in our unique vision at all times, such that the mind never stops wondering and never stops searching for better solutions. If we are willing to offer blood, sweat, and tears, the soul will grow and the vision will become evermore clear. This is true for the journey of bringing up children, loving elderly parents, advancing though the complex demands of marriage, holding a job, starting a business, cooking a meal, or writing a poem.

If we are willing to dig deeply to repair leaks and remove blockages, the source of life will flow. 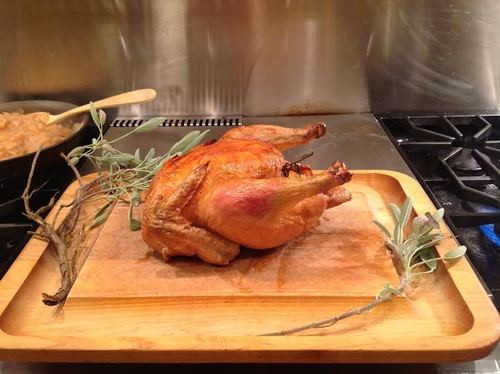 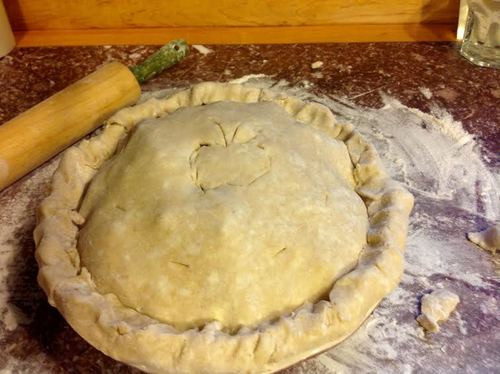 This six-pound, pastured chicken and evolving apple pie provided for Susan and me this Thanksgiving. We were solo for the first time ever, and savored the tranquility. Family are coming this weekend, so we will not be at the Winter Farmer's Market in Hyde Park this Sunday. But we will be there the following week on December 7th. In the meantime, you may order on-line, as always, at: http://grassrootsfoods.biz/on-line-purchasing for next delivery on Wednesday, December 10.

In this season of gratitude, we express heartfelt appreciation to all of our customers for your support. We are most thankful you are our partners. 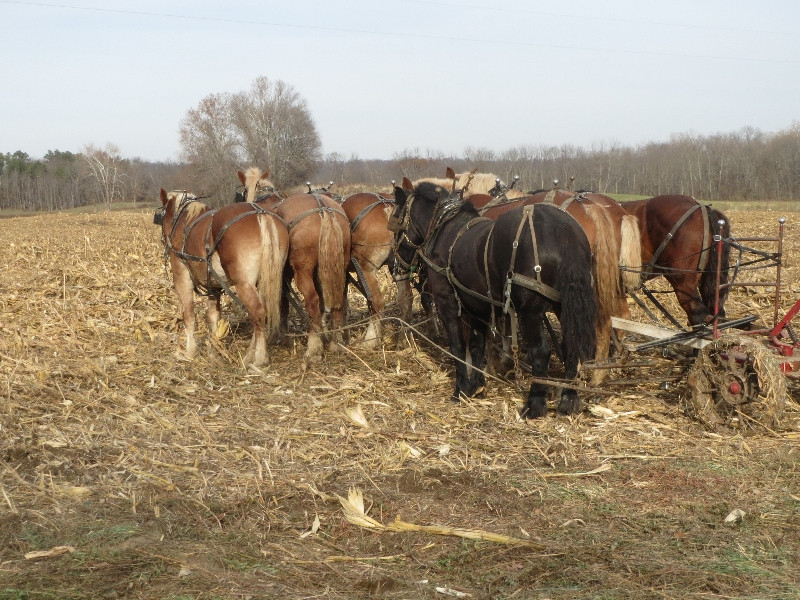 LIQUID GOLD: THIS JUG OF HONEY WAS DELIVERED ON THURSDAY BY RAY WEAVER. 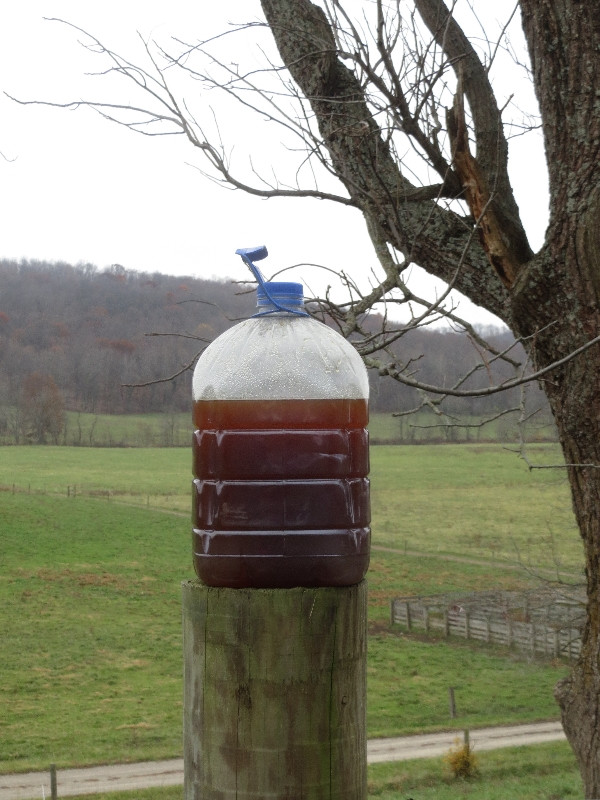 IRELAND IN OHIO: DEEP GREEN PASTURES IN NOVEMBER, Due to spreading chicken manure in September, suggests the emerald island of Ireland. 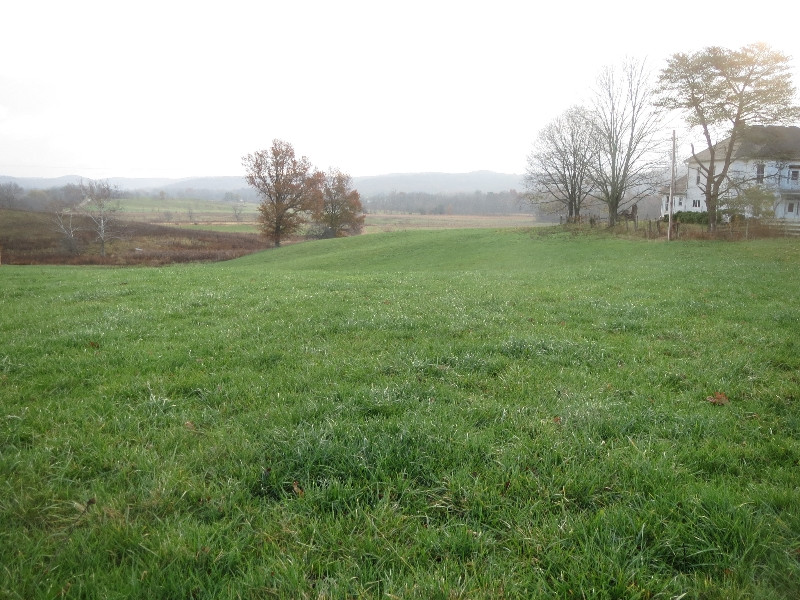