A DYING COW, TWO NOBLE WOMEN, AND A FINITE FARMER 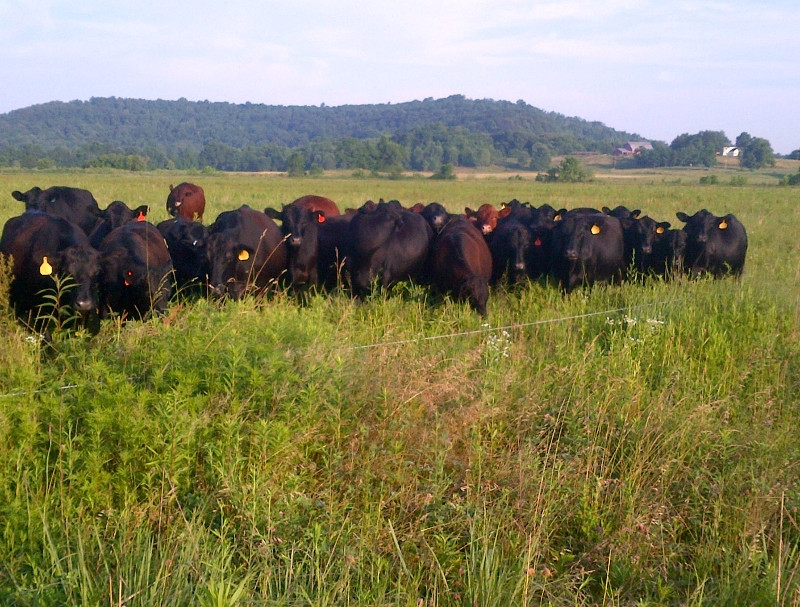 The intention was to leave our house in Batavia this morning to drop meat off at Helene's and visit my father, but my cellphone apprised that one of our cows was "down" at the farm. An hour later I found Red Devon W92 on her side in labored breathing. Cole and Whitney were on the morning shift, and had done their best to right her, but she resisted. I then struggled for three more hours with tractor, ropes, and bales of straw to bring her to an upright position, so she could breath, which met with mixed success. The vet showed up in the fourth hour, and together we righted her another time. He applied an IV of magnesium & calcium, but did not leave feeling optimistic. By the time his taillights disappeared, she had gone prone again. Into the fifth hour of hugging, pushing, and pulling, with her manure and saliva all over my front, I tried again to bring her upright and buttress her with large round bales on each side. But other cows were crowding around, pushing the bales askew, and licking the cow... Something was clearly just not right.

So, I gradually began to submit. Both she and I were exhausted by this time. I then thought the kindest thing might be to "put her down", so she wouldn't suffer through the night, since her will to live seemed to have dissipated. As a former employee had stolen my gun, I went down the road to Landis' to borrow his. He had no slugs for his gun, but returned with me to help load the noble cow onto the front-end loader so we could move her to the shelter of the barn. I called another neighbor for a rifle, but she wasn't home. That plan wasn't working either.

After a day of struggle and best intentions, all I was able to accomplish was moving her into the barn. Her kind and gentle eyes kept surveying and boring into my growing ineptitude. After a while, I began to feel it wasn't me she was looking at, but something through and beyond my poor purpose. I finally realized I made no difference at all in this situation. So, I put the tractor and bales of straw away, laid my hand on her great shoulder, and in heart-heavy deference, began my retreat to Batavia to have dinner with Susan. During the drive, I tried to make sense of the intimate smells of her body upon mine, the wisdom in her eyes, and her increasingly labored breathing.

Upon entering the house, Emmy Lou Harris was intoning Appalachian minor keys from one wall to another and aroma of lamb stew emanated from the kitchen. A tall goddess embraced me, with empathy flowing. By the time I was out of the shower and on the couch with a beer, Pavoratti was ushering his resonate tenor-storm from bowels of the earth to heights of mountains. So, in compliance, I let myself cry - over the tenor storm, the noble cow, the noble wife, and how finite this farmer is...

When we sat down for dinner, YoYo Ma was strumming, and the richness of the day only grew. Lamb stew with fresh carrots, apricots, almonds, and parsley - another touch of exultation.

How does one make sense of all of this? I don't really know.

But tomorrow I will take that dear cow to the woods, and try to listen one more time to what she has to say. She and you and we are in this great circle together, and how rich life is as a result.

Thank you for caring.

Drausin Wulsin
Read more posts like this
Return To Top